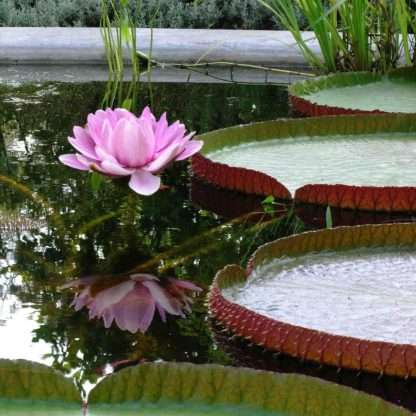 UNPRECEDENTED SIZE! Giant Victoria Water lily is the largest water lily in the world! The giant lily pads can grow up to 8 feet in diameter! It is not only very large, it is also very strong! The lily pads are supported by a ribbed underside and anchored to a submerged stalk that in nature embed themselves in the lake or river bottom. These impressive lily pads can support up to 65 lbs of weight without issue and if the weight is evenly distributed it can hold up to 160 lbs!

A PLANT FIT FOR THE QUEEN! Giant Victoria Water lily was discovered in 1837 by Richard Schomburgk on an expedition to British Guyana in the Amazon River. It was given the name Victoria to honor Queen Victoria of England who became queen that same year. There was a large interest in exotic plants during that time, and it caused the Giant Victoria Waterlily to go viral by Victorian Era standards!

ANNUAL BEAUTY! Giant Victoria Water lily is a perennial in its natural environment, but best practice is to treat it as an annual. Overwintering this waterlily is not easy, but luckily Chalily grows Giant Victoria from seed every year, so you can always choose to have this magnificent water lily as a part of your pond!

100% QUALITY GUARANTEE! Our water lilies are grown & shipped with care by skilled aquatic plant experts. Your plant is guaranteed to arrive alive and healthy!

Victoria Cruziana, also commonly called Giant Victoria Waterlily, is an absolutely magnificent waterlily and is the largest water lily in the world! Giant Victoria Waterlily have large lily pads that are up to 8 feet in diameter! These large leaves have upturned edges and the undersides are ribbed and covered in sharp spines which are a possible defense against herbivores. The leaves are anchored to stalks that can be up to 26 feet long and in nature embed themselves to the lake or river bottom. The leaves grow rapidly; up to 20 inches per day! The lily pads on the Giant Victoria Waterlily are not only unmatched in size, but also in strength! These leaves can support up to 65 pounds on its own, but if the weight is evenly distributed it can hold up to 160 lbs! While this plant is known for its large lily pads, it also produces beautiful blooms! These blooms are 9”-12” across, start out white and turn to pink after it releases its pollen. The blooms are also very fragrant and have a butterscotch and pineapple like scent. The Tupi people of Brazil regard the flowers of the Giant Victoria Waterlily as objects of great beauty. They have a legend where a young girl fell in love with the moon and stars and drept of being one of them one day. As the young girl was leaning over the water to embrace the moon’s reflection she disappeared. To overcome her loss, a goddess then transformed her into the most beautiful flower of the Giant Victoria Waterlily.

Giant Victoria Waterlily was discovered in 1837 by Sir Richard Schomburgk who was on an expedition to British Guyana in the Amazon River. It was named after Queen Victoria of England who ascended the throne the same year. When it was discovered Richard sent drawings and written descriptions back to Britain. There was a lot of interest in exotic plants and so the waterlily went viral by Victorian Era standards! The South Australian Botanic Gardens grew a Giant Victoria Waterlily a year later, and when it was blooming the newspapers ran hour-by-hour updates! The waterlily also inspired the structure of The Crystal Palace. Even with all the excitement about the new waterlily it took 12 years, until 1849 for someone to successfully grow the first bloom in England. The flower was then presented to Queen Victoria.

In its native habitat Giant Victoria Waterlily is a perennial, but the best method is to treat it as an annual. Giant Victoria is one of the most unique and wonderful plants that you can add to your pond or water garden. Although this waterlily can definitely take up some room, Giant Victoria water lily can be adapted to various size ponds. This waterlily will be the perfect addition to your pond!

NOTES FROM THE EXPERTS AT CHALILY: Our live Water Lilies are delivered as bare root plants. This means that the plant has mature, growing root structures ready to be planted. We recommend Chalily Lily and Lotus Fertilizer for all flowering aquatic plants for best blooms and growth. 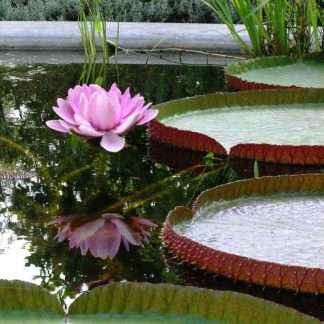