PLANTING HISTORY! Dwarf Giant Papyrus is a Payprus plant that was originally used by the Egyptians to make paper! Not only will this plant be a focal point in your pond, it also has a fun backstory!

MOTHER NATURE KNOWS BEST! Water plants act as filters & work WONDERS for the clarity and quality of your water–naturally! They also provide excellent habitat for your prized fish and other wildlife!

BLACK THUMB FRIENDLY! Pond plants are forgiving & super simple to grow! All they need is plenty of moisture & some gravel or soil to hold roots in place! Easy as that!

100% QUALITY GUARANTEE! Our plants are grown & shipped by skilled, trusted aquatic plant experts. Your plant is guaranteed to arrive alive and healthy!

Cannot be shipped to: AZ or CA

NOTES FROM THE EXPERTS AT CHALILY: Our live plants are delivered as bare root plants. This means that the plant has mature, growing root structures ready to be planted. We recommend Chalily Lily and Lotus Fertilizer for all flowering aquatic plants. 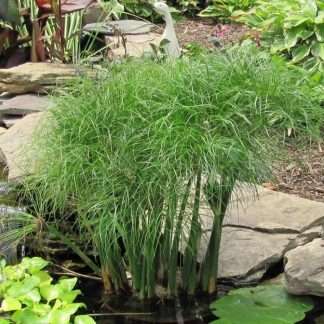